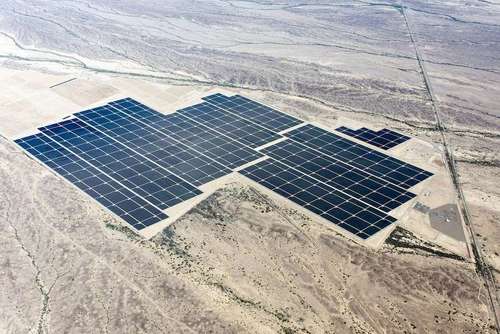 Earlier in February, the state of California got a whole lot greener with the opening of Ivanpah, the world’s largest solar thermal energy plant.

The Golden State will get even closer to its goal of sourcing a third of its power from renewable energy sources. Situated on 2,400 acres of desert land between Yuma and Phoenix, the world’s largest fully-operational solar power plant has recently finished construction. With a maximum capacity of 290 megawatts, the Agua Caliente power plant will generate renewable energy for 230,000 homes back in California.

Ivanpah is the “world’s largest solar thermal energy plant” with a capacity of 290 megawatts–enough energy to support the electrical needs of 230,000 homes.  If Californian, Arizona, and New Mexico can find a way to integrate solar energy into their shared grid, why can’t Hawaii do the same?  The state Public Utilities Commission has begun the switch over to solar power with a ruling that mandates the state’s electrical utilities  submit plans to fully integrate photovoltaic systems into  each Island’s grid.  It’s about time.  The longer we delay the full integration of all types of renewable energy, the more imported oil will cost us and the more vulnerable our economy becomes to variations in the crude oil market.  As Bob Dylan once intoned many moons ago, “You don’t have to be a weatherman to see which way the wind blows.”  Basically, get with the program.  Aloha, Russ.