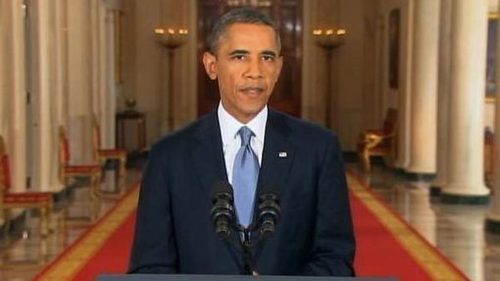 ABC News
Obama: ‘If we fail to act,’ Assad will continue to use chemical weapons
Hawaii News Now
President Barack Obama speaks on Syria from the East Room of the White House. (Source: CNN).

The U.S. has been working to stop the use of chemical weapons in the Middle East for over three years. So far, no results.  Perhaps, the Russian initiative to bring Syria’s chemical weapons inventory under United Nations control will be the first step in solving this dilema.  As critical as this issue is, this country has no desire to enter another civil war in the Middle East.  The President’s effort to convince Congress to authorize force against Syrian President Assad is being delayed until the diplomatic options are run out.  President Obama should have consulted Congress years ago on this issue.  If diplomatic efforts fail to stop Assad, then what?  Do I hear "mission creep?"  In the absence of a clear objective with a definite time line Congress should opt out of this Middle East cauldron.  Sometimes I wonder if our experience in Iraq and Afghanistan has taught us anything.  Aloha, Russ.

5 thoughts on “Obama: ‘If we fail to act,’ Assad will continue to use chemical weapons – Hawaii News Now”