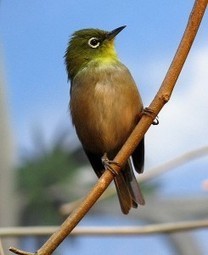 Though most people focus on Darwin’s famous birds, I would argue that the Hawaiian honeycreepers are the most dazzling example of adaptive radiation, especially by a finch. From a single finch ancestor arose a stunning …

Contrary to popular belief, the Hawaiian honeycreeper is in deep trouble.  Based on research done in the Hakalau area of Hawaii Island, the population of these beautiful birds is "crashing".  Part of the blame can be placed on the agressive whiteeye, which feeds on the same plants as the honeycreeper.  Researchers believe a capture-breeding program may be needed to save the species.  Aloha, Russ.