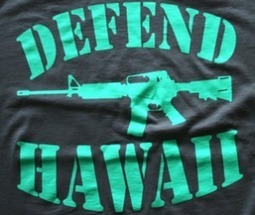 “Defend Hawaii” T-shirts feature AR-15 assault rifles
Hawaii Reporter
The same sort of assault rifle used in the school massacre has been featured on T-shirts, caps, and car stickers which have been selling in Hawaii for about 5 years.

Keith Conklin, PhD, raises several important issues in this article.  Response to his article has been spirited and often negative.  If the shirt and cap are repulsive, don’t buy them.  I suppose all of this comes under the "Free Speech" provisions of the U.S. Constitution.  There was a time when such displays as burning the American flag were considered bad taste and often illegal. But now, public mores have changed…anything goes.  Aloha, Russ.